I know most of you who read this blog (does anyone still read this blog?) are my friends on Facebook as well. So you know about my Abe and my Aristotle. But writing for me has always been therapeutic on some level and after spending the entire day on the couch watching Season 2 of Sons of Anarchy (love/hate that show) and crying at the mere sight of my dogs’ water bowl I decided maybe I’d try to write about them.

About a month and half ago Abe started showing signs of something like a UTI. He peed in our house for the first time since he was a pup and had to go pretty frequently. Took him to the vet multiple times over the next few weeks and nothing was working. He stopped eating, slowly his legs stopped working properly. It wasn’t good. So I sent a little Hail Mary to Facebook and the next day we fed him heated hot dogs. He ate 6 at one time. There was hope! We took him to a new vet who decided to go a different route with treatment and it worked…

Until it didn’t. The last 2 weeks I could tell he was giving up. Finally, last Wednesday I laid on the floor with him and I just knew. I knew it was time. He hadn’t eaten, he looked like this.

I told Zach I thought it was time but he didn’t think so (we all know we humans handle these things differently). He asked me to take him to the vet Thursday morning. A good friend met me there. She had to lift him into her car. As we virtually carried him into the vet, I was swallowing that lump of emotion. Over and over. Until Abe got on the scale and it showed he was 110lbs. I. lost. my. shit. My Abie baby was always around 165 (I know this because Zach had a small obsession with how big he was as he was growing). The vet said if the meds didn’t work, Monday would be the day.

You know where this is going, of course. The weekend was spent with Abe on the couch. Time spun too quickly, as it often does and I felt that pull in my belly. The blanket of sadness, the constant tension in my throat, the tears at the brim. Sunday afternoon I took my nap with my baby knowing it would be our last. 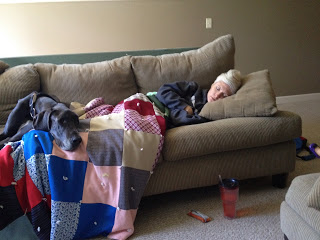 And did I mention that Thursday, when I had my “talk” with Abe, he walked off with Aristotle? I was outside and saw Abe walking okay for the first time in weeks. He and Aristotle were walking towards the horse pasture where they pulled many shenanigans over the years. I thought to myself, “Man, it looks like Abe is breaking the news to Aristotle like he just broke it to me.”

And later that night, our Aristotle didn’t eat. Our Aristotle who would literally eat an entire bag of dog food if we let him. Stopped. eating. I told Zach I thought he was sad, you know, because Abe just told Aristotle he was done fighting. 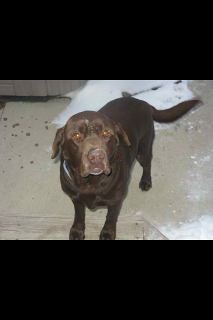 But then when I was in Chicago Saturday Zach told me Aristotle wasn’t walking right. He still wasn’t eating.

I told myself even if he had whatever the hell Abe had we caught it earlier and would be able to treat it. Or maybe he was just sad.

And then Sunday morning Zach let Aristotle out before church. That afternoon he still hadn’t come home. Hours of us searching camp for him proved unfruitful. It was going to get cold that night.

I knew. I knew he walked off. I could just tell. He was always the dog that looked out for the family, he would never want to be the reason for our sadness. Never.

Sunday night was the. worst. night. The kids said good bye to Abe. It was heart breaking. I can’t even write about that. Maybe some day but not today.

Monday morning I dropped the kids off at the bus stop and then drove around looking for Aristotle. It was a ridiculously beautiful morning. One of those mornings that Aristotle and Abe would’ve spent chasing deer and other woodland creatures.

I told Zach I just needed to get it over with. I couldn’t watch Abe like that anymore. He could no longer walk and he couldn’t/didn’t need to pee. It was time. So we took him to the vet, we kissed and petted him until he was gone. Shit that was hard. But there was closure, you know? Why do we need that so badly? I don’t know but it was done. He was gone.
A few hours later we were coming home from my sister’s house (what the hell would I do without my family and their terrific distraction and love? I don’t even want to know) when Zach called. Aristotle had been found. “Prepare yourself, honey, he looks like Abe did. It’s not good.”
I was just so thankful he was found. Remember that closure thing? He was hiding under a cabin. The cabin was directly across from our house.
When I got home Zach had him in our shower to warm him up/wash him off. The kids gave him a kiss. For the next 20 minutes we were on the phone with 3 different vets. I was about to spend a lot of money that we don’t have to save him. Anything, I told Zach, so that I didn’t have to lose another beloved dog that day.
He sat up, looked at us, laid back down and was gone.
Best buds. Brothers. As poetic as it was/is it shattered my damn heart.

Abe was hilarious. A gentle giant. Always kind of a mama’s boy. He loved to “dance” with whoever would offer it. He constantly creeped onto couches. He was a lap dog born in the wrong sized body, was all. My mom once spent the night and tried sleeping on Abe’s couch. She said she woke up to him staring at her. What the hell was this mere human doing on his couch? It was not surprising that he spent his last days curled up on the couch with constant attention and love poured out upon him.
Aristotle was the lover of all, but the fiercest protector. The one time I saw him aggressive was when a guy coming to clean our carpets approached the house. Aristotle bared his teeth and growled, backing the man into his van. As soon as I saw the guy I too got the heebie jeebies. Aristotle knew, and he wasn’t going to let that guy near us. I never once felt scared living out here when Aristotle was around. He was always the dog that came and laid his head on my lap when I was sick or sad. When Zach was gone he would follow me everywhere. To every room, every bathroom break. Watching. Always. If Zach was there he trusted I was safe and relaxed, going off on his trips around camp, in any pool of water he could find. It was no surprise to us that he let Abe have the attention his last few days. It surprised no one who knew him that he walked off to die. And certainly came as no shock to hear he made his hopeful last stop at a place where he could still keep his eye on us. Under a cabin. 50 feet from our doorstep.
Here’s the deal. If you aren’t a dog lover, this probably sounds a little crazy. But if you’ve ever loved an animal then you know what I’m saying is true. I knew everything about them. All their little ticks and quirks. And I loved them with a fierce mama love.
And they’re gone.
It’s a little unreal.
And so today I thought about loss and love. About how right now love is kind of associated with loss. And pain and hurt. So I turned away my best friends and family because sometimes there aren’t any words and sometimes it hurts worse to talk to other people you love when you just lost something you love because you know it’ll all end this way. And normally that’s ok but not today.
Today nothing is really ok and so you wake up, still groggy, waiting expectantly to hear the sounds of tails wagging and tongues licking and get none of that. It’s too quiet.
Later you’ll try to wash towels but then you realize they smell like loss and so you throw them in the washer and leave to go lay back on the couch where escaping into the TV is too tempting to ignore.
And then your kids will come home from school and ask if they can go visit Abe and Aristotle. You say yes. Because you know the two who asked have seen death in an even worse way and have come out the other side and so, of course, yes go talk to our beloved dogs. Especially because their daddy made a beautiful tribute to them at their burial site.

And then you’ll realize why one of those boys specifically has been so hesitant at times to welcome the love you’ve poured into him. Because love. fucking. hurts sometimes. And if he’s known that since he was 3 then maybe he’s onto something you’re just getting around to realizing.
Maybe the loss of these two most adored pets is another way God is showing you that even though we haven’t all traveled the same paths to get where we are, we can still relate to each other in our shared struggles. Our shared loss and our shared joy.
And so when those kids return from their walkabout you will look them in the eye and tell them you love them. Knowing that there will be days that love for them (and theirs for you) will fucking rip. your. heart. out. But you’ll get up and do it again the next day because sometimes love. will. save. you.
I got a tattoo recently that says “Expecto Patronum”. It’s from Harry Potter. It’s a spell that keeps Death Eaters away. In order to escape the kiss of death you need only think of your happiest thought. Light overcomes dark. Joy overcomes sadness.
I keep looking at that tattoo today and am left with the image of two big dogs chasing rabbits as 5 kids play a game of baseball around them. A mom and dad drinking coffee on the porch, hands entwined.
Expecto Patronum

27 thoughts on “Abe and Aristotle”