ya’ll summer is here. And I love it.

I get to wake up leisurely and then shuffle to Dailah’s room where, still groggy from waking up, she opens her arms and beckons me to snuggle. Minutes spent breathing in her wonderfulness and talking about what she’s looking forward to that day. Leave her to dress herself and shuffle downstairs.

The boys wake up before the girl so as I come down the stairs I give a quick, “Good morning, Klipschs!” and hear 8 tiny feet running to swarm me with hugs. They tell me of their dreams and then run off to start their chores.

I make coffee and begin the breakfast buffet.

Minutes later I hear daddy and daughter coming down the stairs together. I pour my love his coffee and set the table for my babes.

We eat together sometimes, or I postpone my morning breakfast to eat with the man I love more than anyone else.

Kids brush teeth and run to play outside, Zach and I shuffle to the couches to enjoy another cup of coffee together.

It’s all so wonderful, so relaxed. I know the kids sometimes miss their friends from school but for me, I hit summer and never look back. It’s everything to me having us all together for unrushed time in the morning (and sometimes all day).

So if you need me I’ll be here, soaking in every minute, thankful I have them with these people in this spot.

A few weekends ago Dailah had her dance recital. She’d been super excited (and nervous) about it for a month leading up to it always asking when it was. It (and by that I mean “she”) did not disappoint.

It’s no secret that Dailah holds a special place in all our hearts as the only girl in the family. The brothers dote on her, make wonderful exclamations when she steps out in a new outfit, “You are beautiful!” As for Zach and myself, we admit to shamelessly doting as well. It’s hard not to when some days she’s the only one that smells good and hasn’t tried tackling me all day.
So when we got a few minutes to celebrate her very girl-ness, we jumped at the chance. She was beautiful, and precious and perfect.
I mean, seriously.

She had so many people come to support her we took up 2 rows. Her village is rather amazing. Here with the Dawson contingency.

With her flowers we bought her. But would you be able to help yourself?

My babes in all their long haired glory.

With my niece Adley who LOVED the whole show, pretty remarkable for a 1 1/2-year-old!

Jealous of her, don’t mind saying it.

Can you feel all of the doting? Yeah.

I promise, we are here. We are doing well, really well. School is out for summer. My mama love is so excited to hang with my little beloveds all day all summer long. Also excited to hang with this oft neglected blog a little more. Until then I give you this picture. Because I love their untied shoes and and their goofy grins and their unbridled goodness.

Oh. And holy crap how did they get so old? 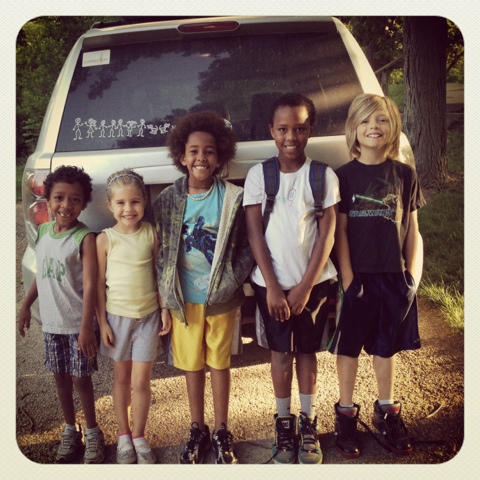 Let me tell you a little something about our Tariku. He is smart, really smart. Top of his class, TAG, reading books past his age level-smart. He is sweet. Let me carry 40 bags so you don’t have to carry any, let me take my sister to the bathroom, let me make life easier for you-sweet. He is gorgeous. Did you see that kid in the catalog? Tariku is way cuter-gorgeous. He is a good friend, a great brother and a terrific son.

And he has the worst self esteem of anyone I have ever known. He has virtually no memories of Ethiopia anymore and yet, deep inside him the only thing that remains is the idea that he’s not loved. That he’s not lovable. That he. wasn’t. wanted.

That’s it. That’s the extent of what he brought with him for the most part.

This shows itself in a myriad of ways. Instead of telling us the truth about a situation he will opt instead for what he thinks we want to hear. When he gets praised he shifts his eyes and changes the subject or gets very anxious. Things like that.

Then there is, of course, the making decisions that don’t really make any sense. Zach and I both know at least part of the time he’s doing them (perhaps subconsciously) to prove that he’s unlovable and unworthy of our love. We know Tariku wants to test how real and true our love is, where our line is. No matter how many times we tell him there is literally nothing on Earth he could do to make us stop loving him or stop us from being his parents he can’t take that in. He can’t allow that to penetrate his heart’s center.

A week ago when we were trying to talk to Tariku about a decision he made at school he was shutting down. He does this virtually any time we try talking to him about reasons for his behavior (truthfully, it’s so rare that it doesn’t come up often). Zach, out of nowhere, asks him if he’d like to write down his feelings instead of talk to us about them.

And friends, the things that came pouring out of him made me weep. 3 pages of things. Things that were buried deep-4 years deep. Things like,

“When you get mad at me I feel like I’m not part of the family.”

Things like that. Things he’s never told us, never even hinted at.

It was all there. Of course we knew it was there before but we had never heard him say it, we only saw how he was choosing to act it out.

Loss, hurt, trauma in a 7-year-old? That acting out can alienate you, it can hinder the relationship and can cause resentment and frustration and anger (from all sides), believe me, I know.

This last year, though, it’s been a huge year for us. These last weeks since he started writing in his journal? Life. changing.

He still gets in trouble from time to time. He still makes poor (7-year-old) decisions.

But we know now. We know he knows that we want to hear all of that. That maybe, in fact, we knew all of that before. And that we loved him anyway.

That we knew his worst and we loved him still, perhaps even more.

That’s what we all want, right? People to know our ugly, our worst, our shame and to love us anyway?

Our kids from broken places need that from us. And we will fall, we will fail. We will have days when we yell and when we wish this wasn’t our life right now. That will happen because we are human.

But every day is a new day. Every moment is a new moment. We get new chances constantly.

And even when it feels like they are winning, when they have frustrated us so much we don’t particularly like them in that moment we will still show up. Our love will show up. And it. will. win.

That’s what I learned these last few weeks. Shame and loss and all of that, it doesn’t hold any weight when compared to how much I love Tariku.

One day Tariku is going to see himself the way I see him, the way God sees him. That day is not today and it’s not tomorrow but we are getting there. And today? Today I’m just so thankful for that.