That’s just who we are.

It starts with my dogs, who don’t discriminate. 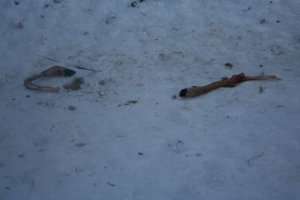 They also brought home the deer hide but I thought I’d spare you a bit.

I was going to yell at them and tell them they were gross until I saw our dinner plate last night. That apple doesn’t fall far from the carnivore tree.

Cathy has been having a hard time deciding whether to break down and get her little girl a dog. I’m in no position to advise her to say no. So here is our most recent ode to our dogs. Zach keeps measuring Abe, thinking he’s small for a great dane. I keep reassuring him he’s quite large, but perhaps it’s because he almost comes up to my belly button. That might be why. But aren’t they beautiful? 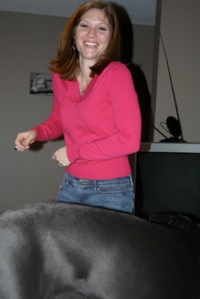 We’re alive, on the mend. So I thought instead of talking, talking and more talking I would show you our last few days in pictorial review.

I walked into my room to find the two youngest in our dog kennel. Breastfeeding their babies. Motherhood can be so surreal sometimes. 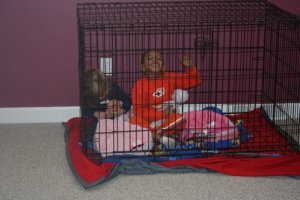 Dailah looking at herself in the mirror after I put a smidge of make up on her.

And really, her eyelashes simply amaze me. 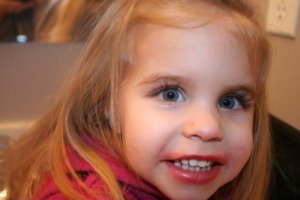 Just too cute to pass up.

Tariku, Dailah and I all have strep throat and it sucks. I’m totally wiped. Just wiped. So wiped, in fact, I wasn’t able to teach my classes this morning which is so depressing to me.

I wish we still got that pink medicine the kids get. Mine smells like…well, you know, whenever I open the bottle. So that’s great.

Positivity….hmmm, Tariku had to get a strep culture at the doctor. He looked at me like, “How in the world could you have let them do that to me?”

I almost laughed, he was so cute. Then he told me that it was okay, he knew I had to let them do it.

So while I’ve been away, a lot has been happening over at Jody’s. Have you seen it?

You’ve seen me write about it hundreds of times. Well it never ended for those of us who it affected so deeply. So Jody did some math and came up with the following. I’ll let her tell it but I encourage (no, demand!) you join. It doesn’t just make sense, it’s is impossible for me to understand why you WOULDN’T want to be a part of this!

So here is her blog (I’ll copy and paste for my mom). 🙂 And then go here to sign up. If you want me to sign up for you, leave a comment or shoot me an email.

‘300 Voices’
Never underestimate the ability of a small group of committed individuals to change the world; indeed they’re the only ones who ever have.” (Margaret Mead)

Sometime in December, I did some rough math. I was all excited because I thought I was onto something. I wondered, “So if we raise $60,000 every year at Water For Christmas, how many years would it take us to give Liberia clean water?” I furiously typed numbers into the calculator. Hit the equal button….

But it haunted me. And I couldn’t shake it.

We have to use this. This is too important.

I might be busy in 300 years. And more importantly, the thirsty cannot wait that long.

Wrestled with it. Heard from so many of you that said, “Now what?”

And settled that we simply will kick it up a notch…or 300.

We will expand our borders, involve more people…300 times.

So here’s the plan. Stay with me.

But beyond that the idea is to keep water on the hearts and minds of a 300 person team. For where our treasure is, there will our hearts be. So we give all year. We pray. We dream. We plan. And then in November 2009, we kick off Water For Christmas with a team of 300. (Now, you are not committing to anything as far as next years campaign goes…you don’t have to do anything. But I think you will want to. But there will be no obligation to be involved in Water For Christmas 2009).

This is how it will work:

water4christmas.com is being developed. And will be ready for launch later in the year.

But for now, go here to sign up. Give us your name and location. We will start of list of people around the country who are committing to Water. (you can do your donations with $5 weekly, or $20 a month, or a $240 donation for the whole year–whatever is best for your budgets). We will not bombard with emails–but if you want monthly or weekly reminders to donate we will do that. If you don’t do online giving, and would like to mail in checks, you can still do that by making checks payable to Charity Global with Water For Christmas in the memo line. Please mail checks to: Charity Global-150 Varick St. 5th Floor, New York, NY 10013. We will even send you a set of 12 envelopes if you would prefer to send a monthly donation by mail.

We will have a counter showing how close we are to getting 300 people.

There’s a new blog badge for the 300 Voices…use it if you want.

Anyone can join us. Talk about it. Blog about it. I know many of us who participated in WFC 2008 were having a hard time shaking it. A hard time letting it go. So this is for you. But even if you were not a part of WFC at all but would like Water to be one of the things you give to in 2009, you can still join us now.

At this point, all it means is a $20/month commitment. The giving is just to force us to put action behind our causes. And provide clean water for thousands in the process. And then ideally in November 2009, we have people whose treasure has followed their heart and they are ready to go. We reach 300 times more people with awareness about clean water. The money is multiplied. And clean water will erupt from the dirt of Africa’s floor.

We will be one voice. 300 strong. For clean water. For life.

By signing up you are simply saying, “Water matters.” And we believe that enough to give $20 of my treasure each month. For people who live without the many comforts and necessities that are my own. It’s that simple.

I want to make it clear that this is merely part of who we are. It’s simply part of loving people the way Jesus taught us to. We cannot love thirsty people without giving them water to drink.

I wouldn’t do this if I wasn’t confident in you guys. I’ve talked to you on the email, on the blogs, in the churches, at the schools. I’ve heard the stories of others that I don’t know. And I just believe there is a force here. A force we can combine and channel. And use to make big impact.

Now there will be resources available and developed throughout the year to help us all at WFC time. But right now, I want to see if we can build a team of 300. Simply 300 people willing to give to Water throughout the year. $20 a month.

Go. Sign up. We’ll add your name to the growing list in the sidebar (it may take up to a day for your name to appear after joining).

(There will be continued updates about all the WFC wells throughout the year. It looks like I may personally be on the ground in Liberia to report back to you about how the Water money is changing and saving lives. And clarify further why we can’t stop. Why we must keep it fresh on our hearts and minds. Even if it’s only $20/month. Times 300).

DId you miss me?

I was gone all weekend at a training. A really awesome, really intense training. I went to a Bodyflow training (go to www.lesmills.com and check out Bodypump, Bodystep and Bodyflow to see what I’m talking about).

You all know how much I love watching bodies in motion, bodies full of strength and passion. So my cup runneth over from this weekend, it was just awesome. Plus, I’m a freak who likes to work out for 27 hours in 3 days. That’s just me.

But it was powerful, I seriously missed my family. Zach made it back okay but I was quite preoccupied with the training so tomorrow will lend itself to lots of “getting back to normal stuff.”

How did the kids do without me? Well I came home and it was like a daddy bootcamp.

Dailah was wearing underwear and had no accidents all day.

Her pacifier was allowed only in her bed.

The boys had learned how to brush their teeth (instead of play for 3 minutes with a toothbrush in their mouths).

I think I need to take a few weekends off a month and maybe something will happen around here!

Hope you’re feeling as calm and centered as I am!

I’m not nearly as cool as I think I am.

Did you guys see that last post? Yeah so I was so pumped up last night when we stayed at my sister’s house (no water out at camp) because she had high speed internet.

So I finally joined Facebook because everyone keeps telling me to.

And somehow I emailed every single person in my email list. That is so embarrasing. I have no idea how I did that.

I apologize tremendously if I emailed you. You aren’t the only one, I emailed the good folks at the government (who helped with the I-600a) so I’m sure they appreciated that.

So there it is. Jigs up. I am way out of my league with Facebook.

Hotflawedmama's All Grown Up
Blog at WordPress.com.