at my parents house. Beautiful day. After a viewing of Cars 2 (“eh” is my professional opinion) it was time for outdoor play. 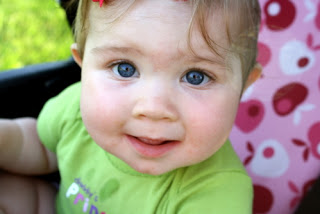 Wherever Adley goes, so to shall go Dailah. 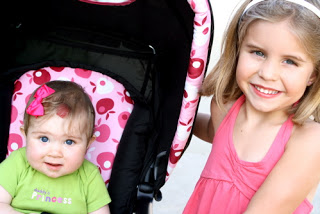 His real smile (shakes head imagining how much his orthodontist bill will be in the future).

And wherever Dailah goes so to shall go Binyam. 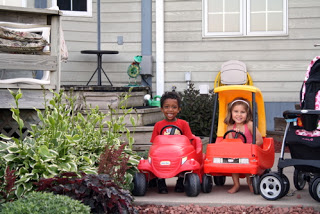 Of course there was baseball. There’s always baseball. Even Lindsey joined! 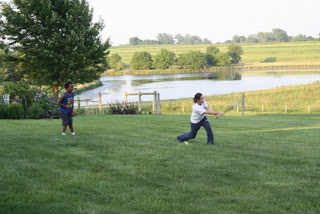 Oh and I came out of retirement to show the boys how to get it done.

And then Adley proved how much she missed me the last few weeks.

Good start to the extended weekend!

-Today the kids were having one of those days when they asked 42 questions every 20 seconds. If there’s one thing I want my kids to learn from me it’s that it’s good to question, to wonder. Curiosity didn’t kill the cat if you ask me. That said today’s questions ranged from

“Mom, how does air get into your eyeball?”

-On Wednesday the kiddos and I pack up and head to Des Moines. Thursday my parents are taking us to Adventureland-this is vey exciting. More exciting? On Friday I board a plane (all by myself, I’m a big girl, you know) headed to Cathy’s house. So far I’ve been told I might be talked into running and staying up until 2am. These two things have not happened for well over a decade for this lady. This shall be interesting. But I’m really excited. Really, really excited.

-We got Binyam some new “cool dude shoes”. These corrective black shoes kind of hurt his feet but they are necessary to continue his correction of his club feet. All of this is good but you know what’s better? His prosthetics doc is super good looking. Salt and pepper hair, big ole eyes, mmm. And he thinks my kids are charming. It’s too bad he only needs these shoes every year or so.

-Got a hair cut the other day. Faulty communication had me with a new stylist at the same salon. My regular woman was giving me some killer looks the whole time but my new guy? Uh-mazing. His theatrics belong in Vegas. We talked of men, big heads (mine) small heads (his) and whether we were team Gaga (me) or team Brittney (him). I. love. him. Unfortunately I will now only be able to get my hair cut by him when my regular girl is gone OR talk him into making house calls.

I know you only come here for the pictures so here you go. Our Aristotle, you know you love him.

I looked out my bedroom window and saw the above picture. Upon further review I found this certain habesha in the tree. That boy loves him some tree climbing. 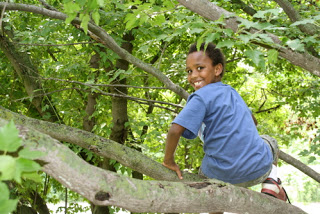 The bigs found this…a baby bat. Tomas just picked him up and put him in their little bug collector. So far no signs of rabies, fingers crossed. 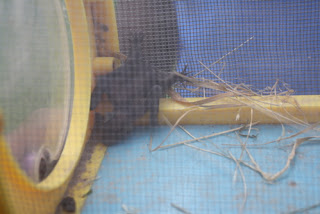 On Sunday nights the camp has what’s called a “Zany campfire”. The counselors and directors dress up funny and tell funny stories, etc. This Sunday Zach had Trysten dress up as his mini me and Trysten matched all of Zach’s movements. Priceless.

This week the littles are at day camp. Not sure they come any cuter than these two.

to all of the fathers out there.

I’m lucky to have 2 dads (dad and dad-in-law) and a husband who is the very best.
I have so much to say, and no words to say them. But I love those men, and the other dads who inspire me here and around the world.
Happy fathers day!

Summers at hotflawedmama are always just a wee bit crazy. With Zach working long hours (yay summer camp is here!) and all of the kids home, by the time my usual blogging hour hits (right abouts 8pm) I’m 1 glass of wine in and in no mood to sit and write. All this could explain the picture posts that have been common here lately. But for you, I will now bullet point the goings on of us.

-Baseball season is about wrapped up. The boys had a really great year, losing just once. This means they are in the playoffs which happen next week sometime. I have absolutely loved watching all of them become better players and more avid baseball fans. Watching ones kids be so excited about something is thrilling enough but watching them be so excited about something you and your husband loved so much at that age (sports in general) is pretty thrilling as well.

-The kids have transitioned really well to summer. Other adoptive parents can attest, it’s typically a time we hold our breaths and hope for the best. Our kiddos who come from hurt and/or trauma can have major difficulties with less structure and transitions in general. There are a few reasons why I think it’s been successful thus far:
1) We signed Tomas up for a tutor to help him continue to catch up with incoming 2nd graders. Having this little bit of school has seemed to really help ease him into a more carefree summer. Plus, the kid loves to learn and he loves to play baseball, so I’m covering all of my bases with that one.
2) Our days are still pretty structured. I am still teaching my classes, so they know which days we go to the Y and which days we don’t. They have really good friends at the Y so they look forward to those days too.
3) Sleep. Oh boy is sleep a big one! They had been a little deprived towards the end of the school year because of baseball and it getting nicer outside, etc. Now that we’re all caught up I’ve noticed a huge difference in almost every single aspect of their personalities.
This doesn’t mean it will be like this the whole summer, but we’re off to a good start so far.

-A few weeks ago we took Binyam to our local AEA (area education agency) to be evaluated. We noticed early on that he was a little behind in development but we were going to see what happened after preschool, etc. The boy has made HUGE strides but we could tell there were areas he still needed help. The AEA agreed with us and next month we go for more testing to see what exactly he’ll qualify for. When I talked to the woman who tested him she was very hopeful for his development. She said it was pretty clear he didn’t talk much before we got him (he never really talked in Ethiopia at all, which Zach and I noticed) and because of that his jaw has atrophied. This also explains why it takes him forever considerably longer than his siblings to eat his food. His hearing and speech checked out great so she just thought it was a matter of developing strength in his jaw and rewiring some of the wires that probably shorted out in his first few years of life. I’m so happy we were proactive about this, I know they’ll better equip us to help him at home too and for that I’m so thankful. That said, I cried on the way home from the appointment because I just want life to be easy for him. I know that doesn’t teach my kids character much, but it’s still something we want isn’t it? But the kid is a capital Hard-Ass so I know it won’t get him down. And I love him so much my jaw clenches tight enough for the both of us when we hug.

-Humor. My kids are starting to develop theirs. The last few months Zach and I have been educating them on all things joke telling. Not an hour goes by that one doesn’t come up and ask, “Mom, is this funny?” And then tell a joke or, in the case of my boys, fart on cue. Since I hold no illusions that my kids are perfect (though they are ridiculously close :)) I am honest with them. I find their humor is funniest when they are just being themselves, which I remind them of often. Dailah, if I’m being honest, seems to come by it more naturally than the others. I think it’s a Klipsch thing, she reminds me so much of her dad. But the girl is funny, which makes me so happy because she’s also beautiful and the beautiful funny women I know all got on in life ok because they knew their beauty didn’t mean anything in comparison to being able to make people they love laugh.

-I still love run on sentences in summer, apparently.

-In less than 2 weeks I’m heading to her house for some quality girl blogger time. I could cry with excitement. I’m also a little nervous. She said it best with regards to meeting blog friends (and she will actually be there in 2 weeks, as will be the amazing woman pictured with her). My excitement still far exceeds any brief, high school inspired, paranoia.

-Today we are celebrating father’s day a day early. Zach has to work tomorrow so we thought we’d bump it up a day. More on him and how much my world stops when he enters the room later.

-And arguably the most exciting news ever to grace hotflawedmamaland (only partially joking here) WE GET CENTRAL AIR CONDITIONING!!!!!! You read that right, after 4 years without it, the generous YMCA has agreed to put air in our house. Next week. I could cry. I am excited about this because I am home with some very sweaty kids in our house all day. Zach is excited about it because he will continue to have marital relations with his wife have a very happy wife upon his return home.

-Tariku is officially wearing deodorant. I don’t even want to talk about it. But it was time. Doctor said his sweat glands matured fast, which apparently happens. All I know is that it’s surreal watching my 6-year-old son apply his dad’s deodorant to his underarms. Someone hug me.

-I freaking love summer. The weather, the swimming, summer camp, watching my husband in his element, getting my kids around me all of the time, seeing some of my friends more (yay teachers!), love it all. 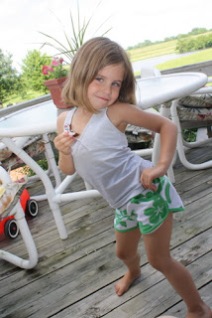 If you’ve been paying attention on this blog you know that mama likes wine for the heart benefits because it tastes so good. So when I got an email from my mom saying one of my friends (who is getting married in a few months) was offering us a tour of the winery where her wedding will be held-and a wine tasting to boot- I replied simply:

“You had me at wine tasting.”

When we got there this was one of the signs that greeted me. I knew then that me and this winery were going to be friends. I also knew my friend getting married, Kerri or “Pete” as I call her, was just as smart as I thought. 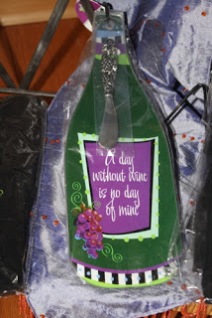 Pete was a little tardy so my mom made the smart decision to have a glass before Pete arrived. My mom and a few of her besties. Mom of the bride (middle) and mom of my little brother’s good friend (far right). 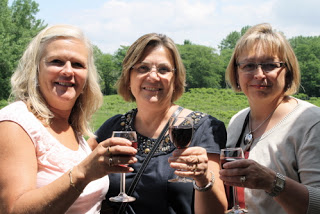 Then of course hotflawedmama and my bootiful sister-in-law, Lindsey.

Once the wine tasting commenced we needed sustenance. Especially because ever since my birthday, I’ve become a bit of a lightweight.

Pete (just to the right of the wine bottles with the dark hair) looked wonderful and happy and full of life, which is exactly what you want from an old friend just months before her wedding. Whether it was the wine or the man she is about to pledge her life to, there’s joy coming from that girl and I was lovin’ it.

Hotflawedmama's All Grown Up
Create a free website or blog at WordPress.com.