One of the reasons we decided to move to Michigan is because Zach’s current job opened up so many more possibilities in terms of travel and adventure. I’ve been making a running list of places people tell me I “must go” in Michigan since we moved here a year ago but we had yet to take advantage of living in a brand new state we know nothing about.

The kids started spring break on April 2nd and on March 25th we started talking about how maybe we should go somewhere. 🙂 We originally wanted to camp but most of Michigan was still either under a layer of snow or might as well have been with the 20 degree temps. We looked at Louisville for awhile because I have family there I’ve been wanting to visit and it looked to be at least a little warmer.

On March 31st we still didn’t know what we were going to do for sure. Zach and I are similar in a lot of ways but there are enough differences to really keep things interesting-namely, he is totally cool spontaneously throwing one outfit in a bag and taking off for parts unknown and I like more than a day’s notice for reasons like packing for 5 kids and myself. But mostly because I need to know where, what and when I’ll be able to eat at all times.

In the end we decided on renting a cabin near Traverse City and Sleeping Bear Dunes for the first part of spring break. Zach still threw one outfit in a bag and I packed 4 bags of groceries and that is how you manage 13 years of marriage. You’re welcome. 🙂

The cabin was big enough for all of us but not big enough for any of us to retreat into a corner and hide. We brought board games and played them every night. It was magical in a really laid back, fun way. And it was gorgeous. Absolutely gorgeous. 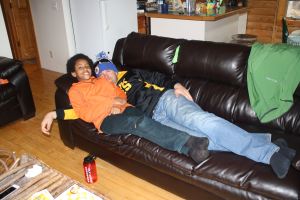 The first day we headed out to Sleeping Bear Dunes for a hike. It was a beautiful day, a little chilly on the parts of the trail that was thick with trees but actually quite warm when we got to the exposed part. 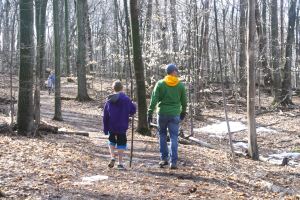 After a few miles we got to some pretty gorgeous views of Lake Michigan. 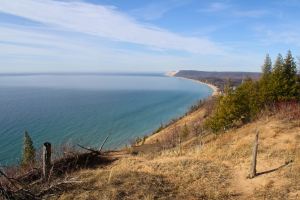 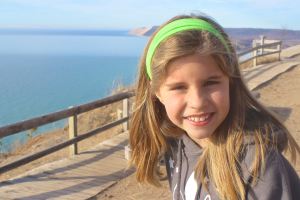 “Launching” is a Klipsch tradition that was started by Zach and his siblings and continues with my kids. There’s a whole lot of talk on who has the best launch, points scored, how to get higher/faster/longer. I’m not sure about the details of it all, I just know that it’s really fun to watch. (Binyam’s club feet don’t allow him to jump so launching isn’t really an option. Never to be left behind, he did enjoy falling and rolling down the dunes anyway. 😉 ) 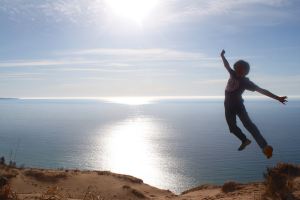 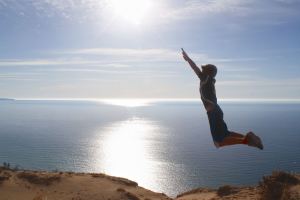 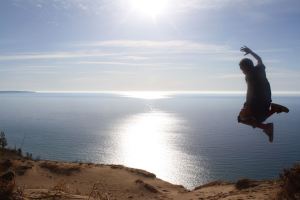 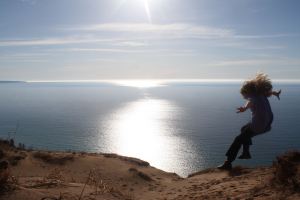 Dailah and I did some yoga

Zach and the boys did more running and climbing of the dunes.

Zach and I were preparing to continue the hike when we turned to yell for the kids to follow. This is what can happen in a few minutes when there’s 5 of them. Love it.

Still a little crazy that my kids are old enough to go on some paths by themselves and catch up with us somewhere down the line. It’s so fun watching them find their independence.

On our way back, with about a mile left, Binyam’s feet had hit their limit. Ever the amazing brother, Tariku offered to give him a piggy back ride for the rest of the way.

The next day the wind had picked up but we wanted to see more of the dunes so we just threw on another layer and away we went. While Zach and I got ready the kids took off around our cabin to find quality walking sticks. 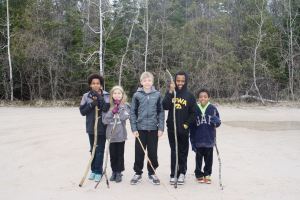 Most of the trail was wide open and the newly picked up wind created a legit wind tunnel that brought the temps down to freeze-your-facial-expression proportions. I was so, so thankful none of the kids complained. It felt like an Easter miracle but maybe it’s just the kids getting older. 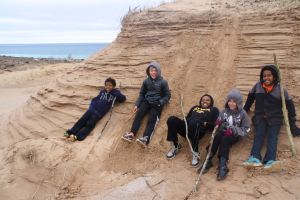 While the bigs climbed (and then launched from) a big dune, Dailah found the rest of us a little bunker to hide from the wind. It was then that Binyam, with his frozen facial expression, whispered about all of the things that hurt on his body. He wasn’t complaining, just stating facts. 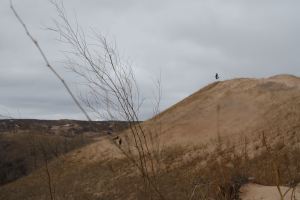 It was still really, really beautiful despite the wind. 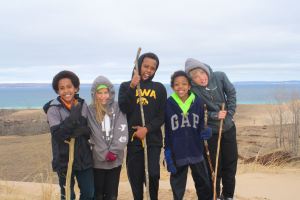 It was a little too chilly to head out again in the afternoon so we went to Traverse City to walk around their really great town. First stop was a coffee shop where Zach and I sat at the coffee bar while the kids enjoyed cinnamon rolls and looked at a map to decide where they wanted to go. Z and I talked for a good 5 minutes about how lucky we were that they get along so well (most of the time) and that we get these moments every day to reconnect just the 2 of us. It’s a lovely thing.

It ended up being a mixed blessing it was too cold to hike-Traverse City was wonderful! We got back to the cabin and Zach built a nice little campfire outside our cabin. It was just a perfect day.

We are amping up for a full schedule of baseball/softball/soccer and cheer this spring so it really was our last weekend totally free. One night in the cabin after the kids had gone to bed Zach did the math on how many more of these free weekends we probably have before Trysten is off to college and it’s just not enough. I am so grateful for every weekend I get with these beautiful babes of mine, grateful we get these chances to get away and hunker down as a family. They really are my favorite people.