I can hardly believe 5 years ago we landed in the Quad Cities for the first time with Tariku as our son.

This picture was captured the moment after we met Tariku for the first time. 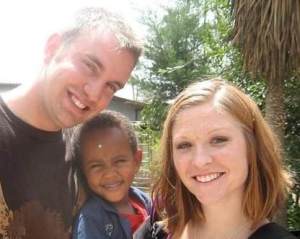 As much time as I had spent staring at his picture the months leading up to us flying to Ethiopia, I was shocked by him in the flesh. I couldn’t get over how bright his eyes were-even more than in his pictures-or how small he was. I had no idea that his smell would smell familiar even though I had never been to Ethiopia before, never held a strange 3-year-old and called him son.

When I look at that picture I see so much innocence in all of our faces. We had no idea how much work was ahead of us to actually feel like a family. It felt so real so immediately I think it blindsided us all when it took a little longer to find our footing.

But mostly when I think of this day 5 years ago I think of how much I have changed because of Tariku. I knew that I could be an advocate for my child but I had no idea the strength I possessed before him. I knew I had a remarkable capacity to love, but I had no idea that sometimes wasn’t enough for my babe who felt so much loss. I knew from the moment I saw his sweet picture on my computer screen that I would love him for the rest of my life but I had no idea how that very love would open my eyes and tear off my skin in a way that had never been done before.

That day 5 years ago was a new stage of vulnerability for me that I was ill prepared for but has reaped in me a newer, better human. If it weren’t for Tariku, I genuinely don’t think I’d be who I am today. Despite all my flaws, the me now is so much better than the me then.

Today as I meditated I fought back tears the whole time. The feeling of gratitude is so alive on days like today-days that I recognize the magnitude of what happened 5 years ago.

So thankful for that day, and for this day. Because then and now Tariku is my son. My amazing, beautiful son.

*I blogged about our first trip to Ethiopia starting here if you’re interested.