We were at the doctor’s office (Trysten has tonsilitis…sweet). The other two were playing when I was reading Trysten a book. His book finished and I just looked at the three of them playing. Then stared at Tariku. I love him.

Not just love him but I REALLY love him. After 8 months I can finally say that. I’ve loved him in some way since the first time I saw his picture but it’s so different now.

I can honestly say that the last 8 months have been an interesting lesson in parenting an adopted child while having biological at home. It was different for awhile. I knew EVERYTHING about Trysten and Dailah. I could describe everything about them from the first time I knew I was pregnant to the present day. Tariku, on the other hand, there were/are so many questions. Did his mom kiss him like this or sing to him at night? When he calls me mom does he know what that means? There is no doubt that it is a whole different ballgame to jump into mothering a child who has so much history. (Never was it bad, just very different)

Then today I seemed to see a whole different personality. More spunky, more childlike. He teased me more and was laughing a lot. It hit me that this little boy has the most incredible survival instinct. In the Ethiopian care center they described him as “selfish, sociable, doesn’t like when kids take his toys.” At the time I shrugged it off as toddler behavior (which was part of it to be sure) but now, after knowing the REAL Tariku I realize it was just his way of surviving.

Of saying, “My world was just rocked and in case it’s going to happen again, I’m going to do what I can for me.” I don’t blame him, I’d try to go out in style if that’s what was happening to me anyway.

But that is so not him, with the exception of sociable. I feel like I could describe him, now, just as easily as I could his brother and sister and that’s a HUGE step in this process.

It seemed to hit him today as well. Tonight when I lay in his bed just giving kisses he was staring straight in my eyes and just looking hard. I can’t really describe it. But I just looked back. I was blissful just staring at him and knowing I would have a lifetime to do just that.

Then he gave me a big kiss and said, “I’m glad you’re my mommy.”

I could finally say with no trace of doubt, “Me too, baby.”

It was awesome. I love him so much and can’t believe the blessing that came in this beautiful boy. 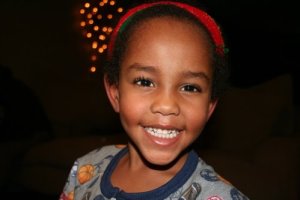