Trysten came home yesterday. After 3 nights and 3 days away we were reunited. It was great. Even though I saw him at least once a day in the dining hall, it was simply different not having him with me on our every day outings.

Most parents would agree that when our kids are gone we think, of course, how we miss them. But sometimes even more so, “I hope they’re on their best behavior.” So before I sent him off I sat him down and had that talk. About being the great little man I know he is. Representing himself in a true manner and standing up for anyone who might need it, etc.

At closing ceremonies with parents, the counselors in charge of activities give out awards for stand-out behavior. His resident counselor, Nacho (from Colombia…thanks Alex, must be better about editing!), was also his activities counselor. Trysten chose “Outdoor Living Skills” that includes building fires, etc. I honestly wasn’t expecting anything because Trysten can be a bit shy at times. He’s a really great boy and because of that can often go unnoticed. He’s not bad enough to be remembered but he’s not typically outgoing enough (in certain settings) to call more attention to himself either.

But with all that said, Nacho gave him the award. He said Trysten deserved the award because, “He is so positive. When the other kids would get negative he would be encouraging to them. Whenever I asked him to do something he did it without complaining.”

Most the time, I’m like Cathy, I think our kids are awarded-out. They get awards for stuff they should be doing anyway. But in this case, I was so proud of him. As he’ll learn as he gets older, it’s TOUGH to be optimistic and energetic when everyone else around you is doing the opposite. But life is so much better when you can appreciate the beauty in even the simplest things. That’s what this award signified to me, that my son at just 6, figured that out for a short amount of time. Oh how I hope he keeps it!

With Nacho and his award.

This award is amazing. Most counselors just decorate a piece of paper. Not Nacho, he takes the morning off and works on his, as you can see. It is absolutely beautiful! 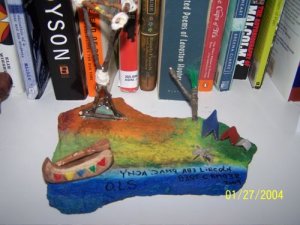 5 thoughts on “My Little Camper”