Two weeks ago I went to Haiti. I posted that I was going but have been wanting to really process what I saw and be purposeful about what I wrote. So I took my time and waited until I felt like I could tell you.

I’m sure you’ve read the same things I had read before I left. That it’s the cholera capital of the world, that it’s still in shambles since the earthquake 3 years ago. All of that. I’d read that and let it affect the way I felt when I thought of Haiti.

But by and large, it’s just untrue. In many ways I think that narrative is out there to serve the agencies that want you to donate to make it better. I’m not saying it’s good or bad (you can judge that however you’d like) I’m just saying that it is.

Haiti looks like virtually every other developing country I’ve been too. Many times we’d be driving/bouncing through the streets of Port au Prince and I became mentally transported to Ethiopia. When I’d see a building that looked leveled due to the earthquake I’d ask the driver, “Did that collapse during the earthquake?”

“How about that building?”

A source there said Haiti now is exactly where it was before the earthquake. Is it great? No. Is it still a developing country figuring it out? Yes. But it’s not what you’ve been thinking.

So Haiti is beautiful. It really is. And do you know where I saw the most beauty?

In the men making the stoves and the women overseeing the process. 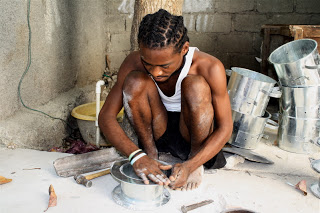 I saw it in the stove vendors and their families. 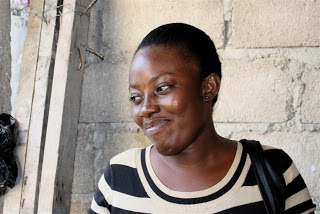 Let me first say I am not in any way being paid by The Adventure Project. I went to Haiti with them because I wanted to see how they work with their local partners. I ask all of my family and friends (and people I’ve met only once or even ones I’ve never met) to give a lot of money to The Adventure Project (TAP). That’s a big deal to me. I wanted to make sure that TAP was THE non-profit in which I wanted to put my energy.

And they are. They are doing it. Charcoal efficient stoves don’t solve all of the problems that afflict Haiti but it solves so. many.

They keep children who would normally be very sick or even die healthier by burning about 40% less charcoal, thus making the air healthier to breathe.

They burn the charcoal slower, thus making it cheaper.

It takes about 1 1/2 hours LESS TIME to cook a family dinner on the TAP stoves. This frees up time to do other essential stuff like cleaning, taking care of children or working.

Which is HUGE for a country trying to pick themselves up from such a horrible tragedy.

When I asked a local how they really felt about international aid they said simply. “We know we have to have it right now. But we want to get to a point where we don’t need it. We want to pick ourselves up. We want to rely on ourselves. We aren’t there yet, but we want to be there some day.”

I was told of another agency that bought 10,000 stoves and then gave them out. A local said that ends up taking the country 2 steps back.

That is why I love The Adventure Project. Because their goal is to become completely obsolete in the whole picture. For the stove venture to become a completely Haitian venture. Come on, that’s amazing!!!!

Ok, off to take eldest to the doc. I will finish my series on my Haitian adventure. There’s still important stuff I want to tell you. This post was heavy on what The Adventure Project is doing. The next posts will be more about the way I see my role in this thing called “life” and “caring for each other” and all of that. And there will be more pictures. Hopefully there will be post with a little bit more of my wit and sarcasm. Get excited for that. 😉