Originally I had planned our week to get more and more exciting as the days went on (with Magic Kingdom and Harry Potter world being our last 2 parks). I hadn’t heard as much about Hollywood Studios so I thought it’d be a good place to start. Interestingly, it ended up being the kids’s favorite Disney park.

A few notes about Disney parks: we went at the perfect time of year so we honestly had no lines. The longest we waited in a Disney line was probably 15 minutes. We scheduled Fast Passes-more on those later as well-but didn’t end up using most of them just because the standard lines were so short.

First spot we went in HS was Animation Courtyard. My scooter broke down soon after entering the courtyard so Zach took the kids on Voyage of The Little Mermaid, which they enjoyed, while my parents and I tried to fix the scooter (didn’t work-had to get a new one later that day).

My kids were at perfect ages for this kind of trip, I kind of loved that they were past the age of wanting to meet every character and get their autographs. Character lines were the longest in the parks so we ended up just getting a picture the first day with two of my favorites. 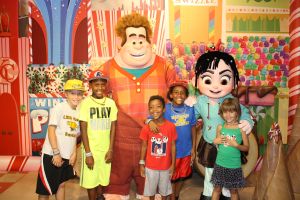 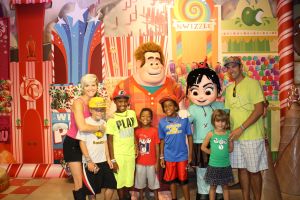 Next was the Rock ‘n’ Roller Coaster. Let me say now, we thought it was supposed to be a tame ride. It was a bit more than that, which was evidenced by Binyam’s facial expression in the photo they took during the ride. Hilarious. That said, the ride is fast, has loads of turns and is mostly completely dark. It definitely made all of the kids skeptical about the rest of the rides, assuming they were all equally terrifying. That said, it was thrilling and Tariku actually decided to go on it again.

Everyone went on the Tower of Terror-and loved it-except Dailah and me. She was beyond over the scary rides at that point so it was just easier to skip it altogether with her.

We also went to The Magic of Disney Animation which was so-so.

But everyone loved learning how to create their own animated animal-Winnie the Pooh for us.

Other rides/events we loved:

Toy Story Midway Mania-this ended up being the favorite of all the kids, a ride we came back to time and again. (Even multiple days!)

Indiana Jones Epic Stunt Spectacular, Muppet Vision 3D, Beauty and the Beast-Live on Stage. And of course FANTASMIC! Which is a nightly show that is not to be missed!

Rides not worth the time, particularly if there’s a line:

The Great Movie Ride and The Legend of Captain Jack Sparrow.

Bean chose a cupcake as his dessert-which came in the form of spaghetti for frosting and a cherry meatball. So fun!

I had a cappuchino with my dessert, Mickey Mouse ears? Fuggetaboutit. 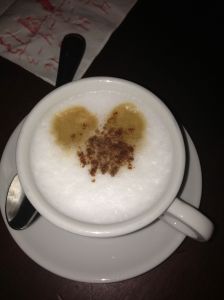 It also rained for a few hours that afternoon but my ‘rents just bought us all ponchos and we carried on as usual. Those ponchos came in handy the rest of the week as it sprinkled a few days and we were able to continue on our adventure no problem! So plan on bringing your own or buying some there if there’s a chance of rain, the rides stay open so there’s no need to get down.