This was written our first full day in Ethiopia-Monday the 9th. I love reading what I was hoping before it all went down, particularly because even though I clearly had high hopes-it turns out I wasn’t shooting high enough. Tariku specifically was a changed boyman almost immediately. Hallelu.

It’s 2:30am in Ethiopia and I’m hiding in the bathroom of our guesthouse so as not to wake up the rest of my family. Tariku has been in and out to use the restroom a few times already but in his sleepy state he hasn’t noticed me in the corner. I’ve apparently become even creepier while in Ethiopia.

Zach too woke up around 1am. As the dogs barked and fought outside and a mosquito buzzed around us we got to talk about the kids we love so much, now snoring loudly around us, and this country we also love.

When we were waiting at the gate for our final flight from Qatar to Addis Ababa, Zach, Trysten, Dailah and I were the only Caucasians at the gate. I couldn’t help but feel so grateful my boys get to experience what it’s like to be a majority for the next week and half. I know it’s something I take for granted often, being a majority in the country in which I live, but because they don’t experience it as part of every day life in America, I’m grateful beyond reason they get to now-even just for a few weeks.

When you’re parenting kids who have experienced trauma it’s insanely difficult not to want a quick fix. I would be absolutely lying if I said booking the flights to Ethiopia wasn’t, in some way at least, doubling down on the hopes that this trip can fix some of the pain my boys have been through. In my head I know it’s not that easy, that’s like taking an antibiotic and expecting it to work immediately on a chronic condition that is roughly as old as you are, but in my heart I just hoped the boys would see how much they are loved.

It doesn’t work that way, I’m aware, and yet already I see the small signs of the antibiotic taking effect. Tariku grabbing my hand in the van without any discussion from me, for instance. Tomas eating plate after plate of Ethiopian food not because he’s scared there won’t be more but because he so appreciates how much it tastes like home. Though Binyam is quieter and more reserved in nature than the other two, he has yet to shut down completely-his go to coping mechanism when things get intense-which is a really big freaking deal.

I don’t think I can pinpoint what exactly I’m hoping to come from the trip other than an appreciation for the country in which some of my sons were born, a chance to see their special people and get to know them as much as possible over the course of a few days and to reconnect as a family. These aren’t specific hopes, obviously, but ambiguous ones that acknowledge the fact that it could take weeks, months or years for us to see just how much this trip has meant for our family.

It’s a big day for Tariku today. We will be heading south in a matter of hours, which explains the tossing and turning I hear coming from his bunk. I tried to engage him on his hopes and fears regarding these next few days before we left for Ethiopia but he was really closed off. I didn’t blame him, of course, but I was so frustrated when I thought about the 7.5 years he’s been with us and yet his inability to reach out when he’s feeling anxious remains.

Tariku still hasn’t voiced any questions or concerns he might have for the most part but as I bring up what the next few days will look like he’s more interested now than he was in the last months when the subject came up. Last night before bed he folded and placed beneath his bed the outfit he will wear today (he said it was his nice outfit) and as he crawled under the covers he asked Zach and me specific details about when we would leave for Hosanna and what we would do when we got there. Marking that as at least the 5th time we’ve told him.

I often think if there was a way for me to take my heart from my chest and show Tariku just how much of it is dedicated just to him he might never for a minute doubt he is beyond beloved. Maybe then he could see that I would never hurt him on purpose because it would be hurting me so deeply too. It might not be enough for him to let me in but if there’s one thing my Tariku has in spades it’s self preservation instincts so at the very least maybe he can understand that I would never willingly hurt such a big part of my own heart.

Since that can’t be done I suppose I’ll just continue to lie awake at 2am in Ethiopia, talking to Zach about the extent with which we would do anything to make our kids feel as loved as they truly are, praying constantly that this trip allows even the slow drip of that truth to settle into their hearts. 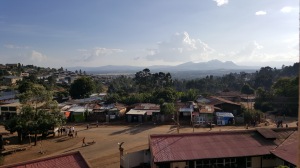 One thought on “Ethiopia Trip-Hopes”