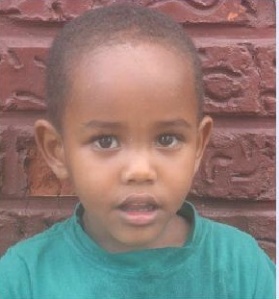 Got up this morning after waking up in the middle of the night for some reason. I had this weird feeling like we would hear something about Tariku. Lately when I wake up in the middle of the night (which is not normal by any means but more frequent the closer we bring him home) I think of him and pray for him and for us and for me that we see each other as soon as He knows we’re ready. I also pray for my sanity, but that’s besides the point. Anyway, I woke up this morning to find an update in my email that was sent right about the time I woke up (2am our time). Fascinating stuff. It basically says he’s been the same in all categories since coming into the care center except he seems to have learned more Amharic as they are able to identify that he can point to all his body parts. But the kicker of the whole thing is his picture. He really is a Klipsch child, as he gets cuter every time I see him.

There are no words for how happy this made me. No words. Isn’t he the cutest little booger you’ve seen? By the way, the kids have been waking up at the butt crack of dawn because they were just not meant to share rooms together. Anyway, when I opened up my email this morning Trysten was right next to me. I saw it said, “Tariku A update” and yelled, “Trysten we got an update!” He said, “We get to go get Tariku!” And before I could tell him not yet, he went to get his guitar and sang a song about it. Seriously, that kid is too much.