So we went to a hockey game tonight. Our local Quad City Flames were playing another team. They had black jerseys and donned names like “Schweizer” and “Schnoodle.” So I’m guessing they came from our neighbors up north. Minnesota always has cool names that sound like they just stepped off the boat at Ellis Island.

Anyway, I was feeling particularly brave tonight and toted all 3 kids by myself to the ice arena. Zach was there for work (basically playing really cool games so kids would beg their parents to send them to camp, every time I looked, it was working). The 3 kids were seriously so much fun I sat congratulating myself for terrific parenting skills more than anything.

So we got there and got some “food”. Man, the stuff they serve at those places is gross. But, the kids loved it and I managed to eat two “hot dogs” so I guess I can’t complain too much. See, they liked it. 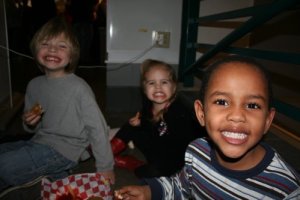 We progressed to our seats which happened to be about 3 rows from the ice. Apparently when the lady asked where we wanted to sit and I shrugged with a weird look on my face she translated that to, “As close to the ice so my kids can hear people yelling things like ‘Throw a puck in his face!'” Perhaps the woman just had more of a sense of humor than I initially gave her credit for. Either way, we were close! This is how the kids felt about it. 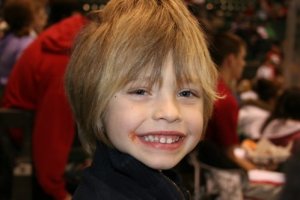 Within 2 minutes the first fight broke out. Everyone was on their feet yet I insisted the boys stay seated so as to show our support of making love not war. I had truly forgotten that hockey players and fans have turned violence into an art form. Within 3 minutes Dailah had decided she was bored and did 1 of these 3 things at different points in the night.

Proved just how parched she was while chatting with her peeps.

All in all the night was a success (though I saw no triple deeks so I know Mighty Ducks was a lie) and we had much fun. Won’t do it again for another 10 years but fun nonetheless.

2 thoughts on “Throw a Puck at His Face!”