and how has it been almost 2 years since we first met him? Those were the questions I was asking myself all day today. Sweet Tariku turned 5 today and was, in all honesty, probably the cutest birthday person I’ve ever seen.

Our tradition is to wake everyone but the birthday person and then sing “Happy Birthday” en route to the birthday person’s room. When we opened the door mid-verse Tariku was out of his bed, jumping up and down with the biggest smile I’ve ever seen.

He was so, so excited.

So we went to get the birthday donuts, where he got to pick for everyone. Oddly enough he picked chocolate for every single person, I’m guessing it was simply because he loves it so much he couldn’t possibly imagine anyone liking any other kind.

Then it was upstairs for a photo session.

After that it was off to school for the boys and to the Y for the ladies. I taught a class, had gotten a sub for my second class (thanks, Lisa!) so we went to birthday lunch (he chose Applebees-what is it with that place?)

Naps then lots of playing outside. We finished the night at Papa Frank and Mimi Terre’s where there was pizza (his favorite) cake, brownies and ice cream. Oh, and presents, of course!

Dailah with her “Don’t tell Tariku what his presents are, they’re a surprise!” face.

The brownie cake (what you guys don’t have multiple cakes for birthdays?)

And a few of the presents.

Of course we measured him, he’s grown 8 inches in less than 2 years. Can you imagine that? 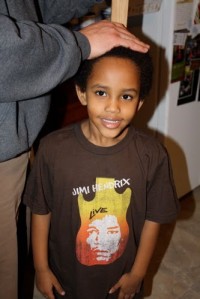 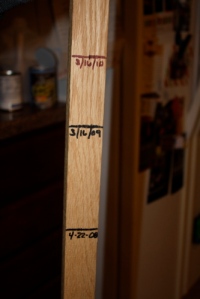 I really am at a loss for words tonight. He makes my heart ache for so many reasons. Birthdays feel different for Tariku than they do for Trysten and Dailah, not because I feel differently for him but because it feels like someone is missing. And they are. On Tariku’s birthday I am constantly thinking of his birth family, wishing we could share this with them, wishing they could see this little guy who is turning into one of the most amazing kids I know. It’s just different.

But what’s not different is my love for him. That is so real, so visceral it surprises even me. I don’t know when it happened, when I started to do the things with him that I’ve always done with Trysten and Dailah. Things like taking in a long deep breath and soaking in their radiance while cuddling, grabbing his hand when he’s near and just memorizing every wrinkle and freckle. I don’t remember when I started to absentmindedly play with his hair and bathe him in my motherly love. I don’t know when it happened but it has and it feels good.

My boy loves having “Happy Birthday” sung to him, he loves (and excels) at every sport imaginable. He is slow to stand up for himself but fierce to protect people he loves. Tariku still will be the first to volunteer to help anyone and when I asked him what his favorite part of the day was, he said it was his daddy coming home (Zach had been gone since Friday). What 5-year-old says that of his birthday?

To love this guy and be loved by him, I count it as one of the biggest blessings of my life. This God I’ve been talking to a lot lately, that God has given me grace I couldn’t imagine by planting Tariku in my life. Though I know there was profound loss in how we found each other, there has been profound love found through that loss. And I suppose that’s a part of grace.

And I suppose that’s love. I suppose his kind of love is the sweetest kind. Happy birthday my sweet, sweet Tariku.