Yesterday we got so much done. With just one week until the big party I am on overdrive figuring out the littlest things (did someone say a table for coats?) that I had forgotten until now. Thankfully I have a pretty terrific husband who went with me to all my errands yesterday, and terrific parents-in-law who took the kids to a movie, so I could have another person thinking about things that I was missing. But we’re getting there and it’s going to be great. I’m literally excited for the whole weekend, not just the Saturday night party.

So a few water things then we’ll move on.

1) Cassie has a new button you can put on your blog or Facebook or whatever that will take people straight to the Water For Christmas etsy shop. Even if you don’t put it on your blog, send people there as they start to shop for gifts!

2) Part of the Saturday night party’s events will be the auctioning off of Africas that people have painted. I’ve seen quite a few of the 25-30 that will be there and I can’t tell you enough how beautiful they are. The good news? You’ll get a chance to bid even if you won’t be able to attend! Look later this week for pictures of the Africas where you’ll be able to bid on the ones you love. For a sneak peak, here is one from Amy‘s mom, picture does not do it justice:

And here’s one from Dana: 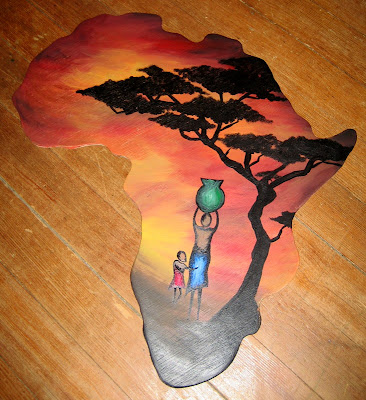 Can you even believe their talent? I honestly want every.single.one that I’ve seen. Oh, and for you Ethiopian fans like myself, my talented husband made one just for you guys.

After that day of work, we had a night of play. Hosting some friends for some homemade pizza. Then it was our almost weekly night of game playing with my brother and Lindsey. We like to play a card game called “Little Pepper”. I have no idea why Zach and I continue to take them on seeings they beat us almost every time (lucky punks). 🙂 Anyway, Zach and I keep trying to throw them a curveball, last night it was playing with the kids’ jumbo playing cards.

That didn’t work either, so we switched finally to a few board games. Since we won both, Zach and I have decided we’re not going back to cards, our egos just won’t let it happen. Love those 3 people, they keep me young. 🙂

And does this make up for not posting yesterday?