in the motherly sense that is.

Exciting news on the homefront, Zach got a computer just for work, so hotflawedmama finally has her own computer at home. I know, I know, hold your applause-very exciting stuff.

Anyway, with that comes great responsibility and by “responsibility” I mean backing things up on a portable hard drive and fun things like that.

So that’s what I’ve been doing. Capturing my some millions of photos on a portable hard drive. And do you know what I found? The transition of Trysten and Tariku from “buddies” to “brothers”, and what a beautiful transition it is!

Thus, I’m dreamin’ of boys today. I wonder if our next adoption will consist of boys or girls or a combination of both. I see my husband with his brothers and I can almost feel that ache for my boys, my hubby and his bros are so close and have so much fun together.

But I want my boys to have that. Probably to make up for my poor brother who had to endlessly be put through make up trials and such with me. Who only 8 years ago found a “real” brother. Since you all know I have a weak spot for my little brother, perhaps that’s why I’m overcompensating, I don’t know.

All I know is, you can’t fake love like this. 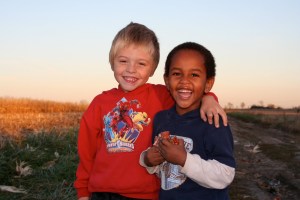 Early 2009 (P.S. I have no idea why Tariku has no gloves on nor why his hat sits atop his head rather than over his ears, call it “personal style”, if you will). 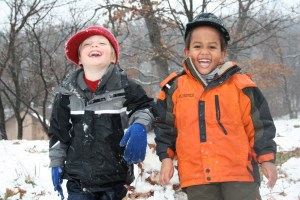 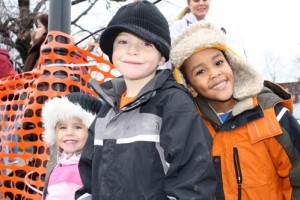 4 thoughts on “Dreamin’ of Boys”