Rebekah received her referral last week. Rebekah is one of my people (though probably there are a lot of people who can make that same claim) and I can say that because I traveled with her when we picked up Tariku and she picked up Matthew Zerihun.

So when she told me she was ready for a champagne toast (code in the adoption world for “I got a referral, come drink yourself silly with me!”) I was downright depressed that I lived 3 hours from her and couldn’t do so in person.

But…she’s a genius. She asked people who were too far away to send in their virtual toast. 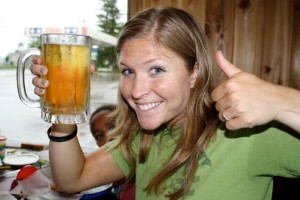 *Quick note, I chose beer instead of champagne because when we were in Ethiopia we had a few beers together. Zach went with someone to pick up some beer from a local shop. We didn’t really realize that it wouldn’t be refrigerated but of course it wasn’t. So we all drank our warm beer and (kind of) enjoyed it.

When Zach and I started out on this adoption some of the first people I told (even before some family and most friends) were my adoption “soul sisters”. The people who I knew would be able to give me support and encouragement as well as a healthy dose of reality “It’s not that big of a freakin deal, Tesi, suck it up.” They are good like that.

Rebekah, she’s one of them. After we got our travel email I tried calling my family, no one was answering! So I emailed Rebekah because I needed someone to celebrate with. Celebrate we did.

After that, I had to text Amanda and Tiffany (also fellow travelers of first adoption and good friends) because I wanted to share joy.

Then I had a good chat with Chandra because she’s hilarious and loves chocolate and I knew she would be excited for us.

So people make fun of me (cough, Zach, cough) because I’m always “on the blogs”. But there’s kind of this thing we do for each other. We laugh, cry and toast together. Most of “my peeps” I’ve never even met but often I feel like I could go to Cathy‘s house and debate over a cup of coffee about which always-talking Ethiopian boy actually talks more.

So this toast goes out to Rebekah, and Patrick. To my buddy Quinn and of course sweet MZ. But most especially to the most precious Dagmawit. Of course that beautiful little girl doesn’t know what just happened to her. Her world was turned upside down and inside out but I have no doubts in just a few short months it will be (somewhat) righted again because she’s landed in the most remarkable family. Raise your glass (or just head over to Rebekah’s blog) and toast the new addition!

3 thoughts on “On "My Peeps"-One in Particular”