It’s true. He’s officially 4-years-old and officially very fond of whatever “Happy Birthday, Binyam” means. Because to him, it means lots of toys that he can call his own. And that is ok in his book.

Of course we tried to make a big deal about his birthday leading up to it. His brothers and sister were doing the countdown-to-birthday for him the past week with Dailah reminding him before bed on birthday eve, “Sleep. Wake up. Bini Birthday!” (My kids have become amazing at shorthand English, so have I if you don’t mind me saying).

Donut run early in the morning, thankfully the “three bigs” had to make it to school early and I had to drive them. So I stopped on my way to school. The bigs got a donut and I got three so all was right with the world…until Tariku told me he wasn’t hungry. That sound you hear is the sound of my brakes slamming quickly. Tariku? Not hungry? Uh oh.

I felt his forehead, burning up. Crap. Take Tariku to the school nurse, temp is over 102. Greeeeat. He comes home with me for a breakfast of Tyelenol. This guy had his donut for breakfast, none the wiser. 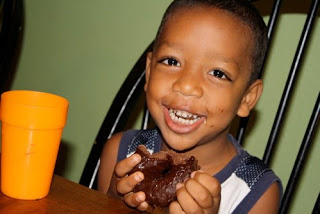 Then off to preschool. I made sure to buy probable 6 month old cookies stand over the stove for hours to prepare his birthday cookies for his friends. 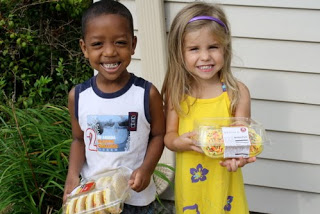 After preschool pick up and a few classes for me, I dropped “the littles” off at aunt Kara’s and took Tariku to urgent care…where we spent the next 3ish hours. When we were finally admitted Tariku’s temp was 103.8. He hadn’t eaten anything all day and wouldn’t drink anything unless I held his mouth open and poured it down his throat. After screaming bloody murder a small wince when the strep throat swab was taken, it was confirmed…our boy (who hasn’t been sick in the 2 1/2 years since we brought him home) had strep throat. Poor babe.

That meant we weren’t going to be able to go to the Minor League Baseball game we had planned to go to with both of our extended families. At this point I was just happy it was Bini’s birthday and not someone who “knew better” and had assumed the day would be filled with sugar and dream fullfilling. Even after the news that we wouldn’t be going to the baseball game our birthday boy looked like this:

Turned out my parents and brother and sister-in-law decided they could risk possible death come give the birthday boy hugs so we went out for dinner. Bini got spoiled, I got alcohol, the kids were excited for him, there was lots of sugar and dreams fulfilled. 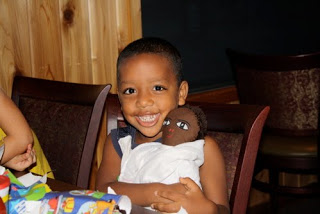 Trysten drew his brother a card complete with a few drawings of the two of them with their arms around each other.

Oh my Bini boy. He has come so far in just 2 months. Sleeps with no problems (as long as either Zach or myself is there, don’t ask our Friday night babysitter who was up with him until midnight about that), hugs like a little koala bear, has a new look in his eyes that we immediately identify as trust towards us.

Not a day goes by that one of his brothers or sister says something like, “I had no idea we were going to get a little brother that is so cute and funny!”

I would have to agree.

I had no idea I would get a(nother) son who smiles so effortlessly despite his past, who fits into our family so well. A son who is smart, and funny and precious beyond my wildest dreams. A son who constantly puts his underwear and pants on backwards and sometimes inside out. A boy who today, out of nowhere, told his aunt that the airplane she got him was “cool”.

Bini loves cars, is still leery of dogs, freaks out if he doesn’t know where Dailah is at all times, doesn’t mind being carried (but only by his older siblings, not his parents). The only food Binyam has ever asked for is Mac and Cheese (for some reason Iowa sweet corn never made the list) so we’ll call that his favorite for now. No idea what his favorite color is but I will say he looks dashing in yellow. Bini’s heart matches his eyes so if that tells you how amazing he is, then good.

Binyam, to me anyway, is the very definition of love. And tonight, even though he and Dailah were pulling shenanigans for WAAAAAAY too long instead of going to bed, I’ll fall asleep praising God for His abundant blessings poured out over our family.

I’ll pray for our family in Ethiopia who is missing this day but undoubtedly remembering it.