As July 26th neared, I asked Dailah what she wanted to do for her birthday. In our house the birthday person gets to choose everything we do and eat as a family, which is often the most exciting part for them. We rarely go out to eat as a family so birthdays are their one chance to choose wherever they want to go. Dailah, though, decided she wanted homemade spaghetti instead because “It’s too hard to have a quality conversation in a restaurant, it’s so loud and there are TVs everywhere.”

Dailah’s first reaction for virtually everything is hesitation. “Hey Dailah, here’s a young lady your age, why don’t you introduce yourself and play for awhile?” Hesitation. “Dailah, why don’t you try doing a cartwheel on that trampoline?” Hesitation. She definitely tends towards a fixed mindset-if she doesn’t succeed at something initially then she believes she will never be successful at it. But after the initial hesitation she usually goes all in. So it was the case with her friend Kenna, who was the sister of one of the boys on our baseball team. Hesitation and then, best friends. (Image from Snapchat, find me there: tesileagh).

Once she’s all in you simply won’t find anyone as hard working or passionate as Dailah. She’s open to new experiences for sure, but doing something in her wheelhouse? That’s her jam. And if it includes snuggling babies or pets, fuggetaboutit.

She’s beautiful, to be sure, but I genuinely believe God saw what was on the inside and decided he would have to attempt to make the outside be just as wonderful. He failed, because there’s just no way to encompass all the joy and life that lives inside this one in just one suit of skin. (Those eyelashes are her real eyelashes. I believe the kids refer to this phenomenon as “I can’t even”)

We’re not a big present family. The kids get to open a few small things that are usually picked up within the checkout aisles of our local Meijer but they never complain. Dailah was rather ecstatic with her fake nails and crossword puzzles.

She’s currently obsessed with cheetahs. Obsessed. Dailah takes after her dad with regards to obsessions-they tend to come and go with the tide. As someone who doesn’t really obsesses over anything, I used to get swept up in each obsession buying Zach or Dailah whatever they needed to show that I supported each one only to-2 weeks later-see those same things collecting dust or in the Goodwill pile. It used to be maddening but now I secretly find it charming, who doesn’t love seeing someone so excited and passionate about something? I get that all the time with these two, I’m pretty lucky in that way. (Notice the cheetah print fake nails-$4 to show I support the obsession? #worthit)

After her week at camp the counselors gave her the “trendsetter” award. They said if she wore her hair one way one day, all the girls would wear it that way the next day. That she came up with some odd combinations of outfits but every time she walked out of the door like she owned the world in that crazy outfit and it somehow looked like the most stylish combination they’d ever seen. They talked about her willingness to help out campers who were struggling and to never leave anyone out. It’s like she sought out the kids who were feeling left out and brought them into the fold, they said. 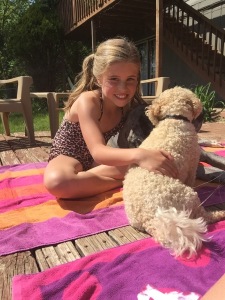 Dailah has grown so much both physically and emotionally in the last year. It’s been so awesome to have deep conversations about what it means to be a girl/woman in our culture. I sometimes forget that we are as open of a family as we are until we are in public. After her cheer competition standing in line with hundreds of people she turned to me and yelled, “These bloomers are going right up my vagina!” Heads turned and one woman said to me, “I’m not even sure my daughter knows the word vagina.” Dailah was shocked to hear this. Doesn’t everyone speak openly about vaginas she wondered? 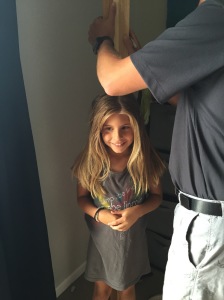 Perhaps I’m most proud of her developing sense of humor. It’s no secret I love comedy and it could be said our family’s love language is sarcasm. Dailah has always been funny but this year she’s started learning when it’s appropriate to use it and when it’s not. As her timing has gotten better so have her witty remarks (and notes).

Or this one, after she helped babysit my nephew Julius (JuJu) while the adults went out for a bit. 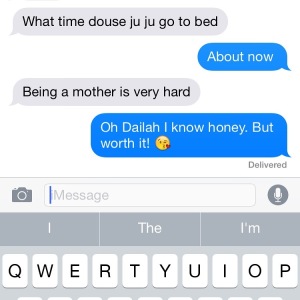 Being a mother to Dailah has always been and remains to be a delight every single day. She is uninhibited joy, laughter uncontrolled all mixed with the intensity of her favorite animal. She is the best snuggler the world has ever seen and the conductor of so much life. I still can’t believe my good fortune at calling her mine.

Love you so much Dailah Leagh. Happy birthday baby girl.