Tariku Asamu Abiyu Xavier Klipsch will be yours.

This morning we (finally) re-adopted Tariku. While most of my travel group was on the ball (thanks for rubbing that in, friends) and did it right away, we took our sweet time. No reason other than I had myself convinced that filling out one more piece of paperwork would literally kill me. Had I known how this day would feel, I would’ve sucked it up sooner.

It happened in Ethiopia before, when they called us his parents. I cried then when the birth certificate came with my husband and my names listed us as his rightful parents. It was a big day then, obviously, but I wasn’t there. I was today. I got to say yes to parenting him for the rest of my life. The judge had obviously been through this once or twice but all I wanted to do was shout from the rooftops that I pulled a quick one on God. I seriously can’t believe He gave us this child. It doesn’t make sense, but I’m not going to bring that up to the big guy.

Anyway, I had been telling Tariku this day was coming but obviously he didn’t really understand the impact. To him, I was mom, no idea why we needed to go through this step (me either, by the way). But we tried to make it a day about him. So in the morning we quickly went to the courthouse where two of his grandparents, two of his aunties and two of his cousins came to watch the judge gavel his way into our life.

(Zach was really happy, just feeling under the weather).

This juror was very enthusiastic about Tariku being ours forever.

Here is the best picture my sister took of us with the judge and lawyer. Our lawyer is the best, I really can’t say that enough. 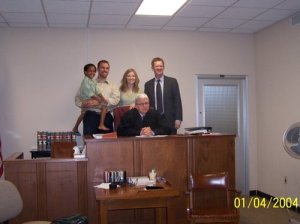 Our first photo of 5 American citizens (on a side note it was also a sad day when thinking about Tariku losing his Ethiopian citizenship, more to come on that I’m sure)

She found lipgloss and was then satisfied the rest of the day.

So after all of that Tariku decided he wanted chocolate chip pancakes from Village Inn. I swear he was not convinced it was a big deal until Papa bought him remote control cars; then it suddenly seemed like a VERY big deal to him.

After this we went to Leslie’s to play for awhile, of course with the cars.

With no cars for these two yahoos they chose instead to focus on intense cuteness.

12 thoughts on “From This Day Forward…”