Yesterday at the Y that’s what someone said to me about Tariku. They just couldn’t believe he hadn’t been in our family the whole time and/or that he didn’t have any “normal” orphan behaviors, whatever that means.

It got me thinking that, for the most part, she was absolutely right, in that he does feel like he’s been in our family forever. And for the most part, he doesn’t show a lot of behaviors that some people attribute to orphans. We’ve been very lucky.

The one behavior he definitely still does have that I relate to what’s happened to him in his 4 short years is how hard he is on himself. There are still many times throughout the day that he has kind of an “I’m not worthy” attitude. For instance, I’ll be giving Dailah a snack and preparing ones for him and Trysten. Before I can give him one he’ll say, “Oh, I don’t get one.” As if to say, of course I don’t get one, I don’t deserve it.

When he was at camp the counselor related the story that Tariku dove into the pool. Tripper (the counselor) said, “Tariku, you know you’re not supposed to dive in,” and turned around. When Tripper turned back around, Tariku had taken himself out of the pool and put himself in time out. Tripper was impressed that he put himself in time out but of course I was worried.

It’s a hard behavior to correct. Honestly, at times, it’s thoroughly annoying. I find myself asking, “Why would you think you didn’t get a snack, why are you going in time out?” But when I’m fully aware of what’s happening I know he’s still hurting. That inside he is still feeling the effects of what, to him, feels like being left. He remembers a lot about Ethiopia which is a blessing in some instances but can be really hard in times like this.

I’m really not sure how to help this situation, if you have ideas I’d love to hear them. All we’ve been doing is reassuring him that he is a fantastic boy and deserves all the best things in life. I’ve started to give him his meals and snacks first. But whenever he gets in trouble he is devastated. Cries, mumbles, the works. He has the same reaction whether he’s actually getting in trouble (taking a toy) or not (accidentally stepping on a toe). I’m at a loss as to how to be proactive about his reaction during discipline.

This is where adoption is hard. I just wish he could feel the intense emotions I have inside me for him. I wish that he knew that I would give him the stars if I were able. He is so, so precious I just can’t wait until he knows it himself.

God, I love this guy. Off to snuggle him, I see an opening. 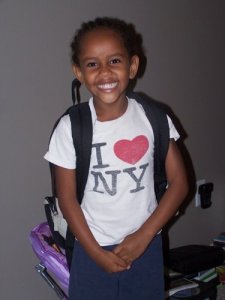