So today was my middle child’s birthday. He’s been talking about it since he first started speaking English. When he saw Dailah’s and then Trysten’s, he decided he was a fan. Bless his heart, he had to wait almost a year before he got his shot. Well his wait ended today and we did our best not to disappoint.

I know you want pictures but let me just say this…this boy, is my heart. He is joy, he is love, he is beauty. After he opened one of his presents tonight (a basketball) he asked if he could share it. That’s him. He’s really that sweet. I find myself just staring at him, smitten. Totally head over heels for my boy.

Most Ethiopians are not born in a hospital, Tariku is no exception. We have no idea when his actual birthday is but today was chosen as a day to represent it. I don’t really grieve that we don’t know his actual day, that is of little consequence. I did grieve a few things today, the mom and dad who weren’t here. Who didn’t get to see his eyes light up when we sang him Happy Birthday. Or feel the death grip of a hug he planted on me numerous times today.

Tariku felt a bit of loss today, I think. We have a picture of a special person to Tariku in our living room. I was walking downstairs and I saw him lingering by it. I went and told him that person was saying “Happy Birthday” to him too and praying for his happiness.

I say it all the time, but I really have no idea how we got so blessed with Tariku. It really doesn’t make sense seeings I am who I am (and Zach, well he deserves something this sweet, but me?). I look at Tariku, the boy who has grown 5 inches, who will play babies with his sister because he loves her so much. Who holds her hand when she walks up and down stairs in case the dogs come barreling down and a stray tail hits her. Tariku, the brother who lets his eldest brother pick what game to play. Tariku, the one who cries when he loses in a game. My ambidextrous ball dribbler. The boy who can sing his ABCs and sings it loudly! The little guy who randomly used subtraction the other day (subtraction!) He’s the guy who pics out the purple Skittles and gives them to me (because he knows they are my favorite).

And even though I grieve for him and some of the losses he has experienced, I find comfort in what hasn’t been lost. I know the little guy who is here, all those things I described, is who he has always been. In Ethiopia, in America…

And he is the most beautiful 4-year-old in the world!

First, Dailah, getting ready to sing, “Happy Birthday” as we walked down the stairs to get Tariku. 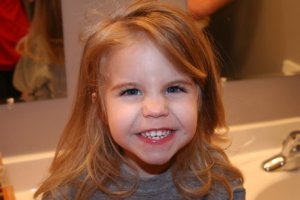 Then it was time to measure. First measurement was April 22nd of last year. 5 inches in the last 11 months. Can you imagine?

Tariku opted for no birthday pancakes because he had heard he was getting surprised with donuts.

The donuts were brought by an Auntie who loves him very much. And these boys. My nephews.

I asked Tariku if he wanted me to make a cake, cupcake or brownies. He wanted cupcakes but I forced him to pick a color different than his brother’s. So when Trysten came home, he offered to read Tariku a book while I made the cupcakes. That was the best background music I’ve had while baking!

The boys tried to wait for me to get done so they could lick the bowl but the 70 degree weather was calling their names so after the book, she was my only “helper”.

After making cupcakes and a short stint of being locked out of the house, we were off to my in-law’s for some pizza and fun. 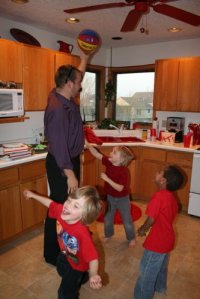 Tonight when he got home Tariku got to talk to Degenet; one of the little boys who was in the orphanage with him the whole time. He was also brought home the same week Tariku was. I’ve kept in contact with Degenet’s parents. Degenet started singing to Tariku on the phone and Tariku started crying. He was so excited to hear from his dear friend. After they talked a bit (with Tariku exclaiming, “I’m in America!”) Tariku ended the conversation with, “I love you, Degenet.” It’s been almost a year since they’ve seen or talked but when you’re a friend of Tariku, you’re a friend for life.