Some of my girlfriends and I went to Sex in the City 2 on Friday, opening night. Here’s the thing, the movie was fun. Of course there were some eye rolling parts, of course it didn’t live up to the TV show or the first movie, of course, of course. BUT, the people I was with, the atmosphere of the room was just fun. So it’s hard to separate the two.

Sex in the City 2, that’s a movie. Which is what this mama of (almost) 5 needs at this time in my life.

But these ladies, these are my other peeps. They’re the peeps that are on the ground, in the trenches of the hotflawedmama madness. They’ve seen it all with me and they continue to dive into the ups and downs of being my friend. They are some of the people that make this life of mine blessed beyond measure. You have no idea what you’re missing if these people aren’t in your life.

But I get them in mine, and I am so very happy about that. 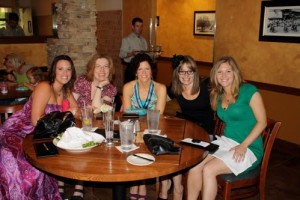 And come on, could they be any sexier? I even got Janet (second from left) to throw off her Crocs for the night and put on a decent pair of shoes. 😉