Oh my my my. Tarku turned 7 last Friday. I know, you are as shocked as I am about that fact. Many of you have been here since the beginning with him. When we received his referral my sweet pea was 2 1/2. That is why I say “my my my” to him being 7.

I realize I keep saying this, but seriously why are my kids so cute so early in the morning?!?!?

Tariku wanted donuts as well. Most days I wish I was half as cool as Tariku is. (Also, it was about 82 degrees on March 16th here in Iowa. That is virtually unheard of.)

We did what Tariku always wants to do on his day. Be outside. Basketball, skateboarding and overall rambunctiousness.

Then we got to go to dinner with Papa Frank. Always, always after dinner comes ice cream.

Tariku really doesn’t like attention on him. So he loved when we sang him happy birthday in the middle of Culvers (no he did not). 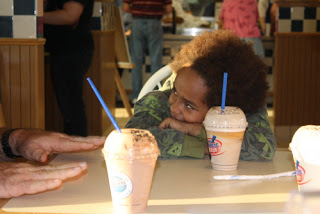 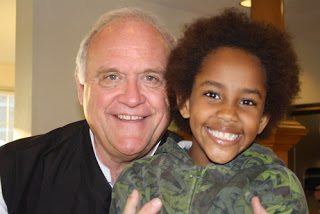 On Saturday he had another party. Homemade cupcakes from Mimi Connie. Super delicious. 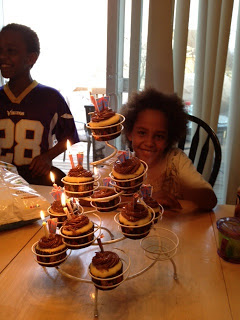 Oh and the skateboard. Do you recognize a theme? Yeah, he got to pick out a new one thanks to his Mimi. I love watching the boys design their own. Tariku’s was perfect.

I don’t even know where to start with Tariku. There are so many things to say about this 7-year-old. Since his birthday landed on spring break none of his friends/cousins could make a sleepover so we’re rescheduling. Tariku took it all in stride (which, honestly, is not normal for him). He really was excited to be hanging with us all day.

I love him so much. He is so smart, so caring, so helpful, so loving. Tariku has endless amounts of energy, which suits him nicely because he loves playing sports. He’s about the only kid I know who can play really hard in an hour long basketball game and then come home and shoot hoops for 2 more hours.

Tariku’s teachers talk constantly about him being arguably their most perfect student. The few times he’s gotten into trouble it’s been because he understands directions before everyone else and he gets so excited about it that he decides he needs to be the one to explain it to them. Otherwise? He’s perfect.

And he is. Another teacher says, “Every time I see Tariku walking down the hall he’s bobbing his head. He’s obviously always hearing music, always dancing.” Word. up. lady. If you’ve met Tariku you’d agree. Which is one of the things I love about him.

My boy still hesitates before coming into a hug with me. He rarely initiates hugs or kisses. That said, his chest puffs up whenever I snuggle with him or go on a date with him. I know how much we both need those moments.

And it’s easy to give him. Because I’m so thankful I’ve been able to celebrate his life (in some way or another) for 5 years. He deserves better than me on my worst days. But every day? Every day I give him everything I have. Because being a mom to this boy is one of the biggest blessings of my life.